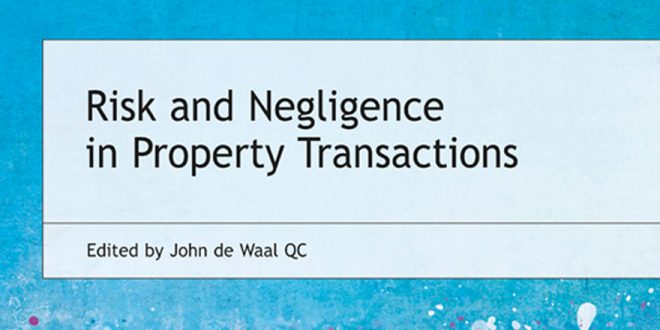 Chapter 1 of Risk and Negligence in Property Transactions deals with a broad spectrum of issues of potential relevance in relation to client care aspects of avoiding or limiting risk.

One of the topics treated is conflicts of interest and, in particular, the potential for risk in acting for multiple clients on a transaction. However, as will be seen below, it is possible that a conflict may even arise when acting for a single client.

Outcome 3.5 (‘O(3.5)’) of the SRA Code of Conduct limits the circumstances in which a solicitor may act for a client where that client’s interests conflict or might conflicts with the interests of another client (known as a ‘client conflict’).  The default position is that in such circumstances a solicitor may not act.  However, the rigour of the rule is somewhat relaxed by O(3.6) and O(3.7) which permits a solicitor to act for clients with common or even competing interests subject to informed written consent and it being in their best interests.

In contrast to the provisions in respect of client conflict covered by O(3.4), the bar in respect of a conflict arising (or potentially) arising between the solicitor and the client (referred to as an ‘own interest conflict’) is absolute and the potential exceptions of O(3.6) and O(3.7) do not apply.  So, for example, a solicitor minded to purchase or take a lease of office premises from which he intends to practice must not act for the landlord.  O(3.4) is in clear terms:

Consequently, it might be thought that the prospects of inadvertently falling foul of O(3.5) might be unlikely to trouble the compliant property solicitor. However, the recent ruling by the Solicitors Disciplinary Tribunal (‘the Tribunal’) in Solicitors Regulation Authority v. Howell-Jones LLP (Case No. 11846-2018) may have made this more likely, particularly when a solicitor tries to make good a mistake which he comes to realise he has made or may have made.  The Howell-Jones case involved trying to undo a mistake the solicitor was advised he had made in family proceedings, but it would apply equally to, say, lease renewal proceedings and, indeed, property transactions generally.

Following a client raising concerns with his solicitors, Counsel advised on 20th December 2013 that a divorce settlement agreement on which the firm had advised – and which was due for approval by the court at the end of January 2014 – was unfair to their client and arose from their poor advice. The firm almost immediately (having considered the matter and liaised with their insurers) wrote to their client on 7th January 2014 informing him that the settlement was binding, that it was unfair to him, that it arose from their poor advice, that he ought to resile from it, and that he could sue the firm if he wished.  The firm apologised and expressed the hope that the situation would be resolved to his satisfaction.  In that regard the firm informed the client that he could either (1) seek legal advice from another firm or (2) if he wished to try and resile from the settlement that the firm would continue to represent him on terms that (a) all his paid fees would be returned, (b) all outstanding fees would be waived, (c) no fees would be charged for the forthcoming hearing and (c) the firm would itself meet any adverse costs order.  A layperson would likely consider such an honour to be entirely honourable, transparent and fair.  The instant client plainly did, writing:

‘I was frankly quite stunned at the full and frankness of you reply and now feel that a huge weight has been suddenly lifted’.

The firm instructed Counsel (different from Counsel who had advised on 20th December 2013) to represent A on an application to set aside the settlement. That Counsel advised there was no conflict in the firm continuing to act.  The application was heard by a deputy district judge in September 2014 who gave judgment the following month.  At the hearing the wife’s costs were said to be some £41,000.

The deputy district judge saw the advice of 20th December 2013 and disagreed that the original advice on settlement had been bad. The application was dismissed with indemnity costs (subsequently agreed by the firm in the sum of £35,000).

In the Statement of Agreed Facts and Outcome (‘SAFO’) on which the Tribunal’s ruling was founded the firm acknowledged that O(3.4) was mandatory and that following Counsel’s advice of 20th December 2013 it should have ceased to act for the client rather than continuing to act for him until November 2014. Not by way of defence but, rather, by way of mitigation, the firm asserted that it reasonably, albeit incorrectly, believed the terms of its letter of 7th January 2014 eliminated any conflict or potential conflict and that a challenge to the settlement was in the client’s best interests.  This was because (a) the terms of the 7th January 2014 letter removed any possibility of the firm being tempted to prefer its own interests above those of the client, (b) a successful challenge to the settlement would put the client (albeit somewhat later) in the same position if that settlement had not been reached, (c) if the challenge was unsuccessful the client would still have the benefit of the settlement and (d) regardless of the outcome of the challenge the client would remain entitled to sue the firm for any losses.  It was further said by the firm that had the client been told to take alternate legal advice he would, by way of mitigation, likely have had to pursue a challenge to the settlement in any event, albeit while incurring increased fees from newly instructed solicitors.

Paragraph 9.3 of the SAFO reads:

Paragraph 11 of the SAFO reads:

‘As regards the effect of the Firm’s admitted misconduct on public perceptions of the professional …, whilst the Firm acknowledges that O(3.4) is a mandatory outcome, reflecting an important legal principle (the obligation of a fiduciary to avoid conflicts of interest), the Firm nonetheless observes that members of the public would consider it a good thing for a firm of solicitors to acknowledge its mistake, apologise for it, offer a full refund or fees, and propose a means whereby the affected client’s difficulties can be put right.’

The Tribunal, having reviewed all the material, concluded that it ‘was satisfied beyond reasonable doubt that [the firm’s] admissions … were properly made. And said that the misconduct was ‘clearly moderately serious in that any situation in which a firm acted where there was an own client conflict[1]  was not a minor matter.’

The Tribunal clearly took the view (shared by the SRA and the firm) that it was in the circumstances of this case absolutely impermissible for the firm to have continued to act after Counsel had advised in the terms he or she had on 20th December 2013 and that the firm should therefore not have offered the client the possibility of its acting on an application to set aside the settlement on the terms suggested in its letter of 7th January 2014 or, indeed, any terms.

Consequently, it would appear that, once the firm had appreciated that it had arguably advised the client poorly in relation to settlement that it had no option but to advise him to seek legal advice elsewhere. Presumably, even in the light of independent advice from a new firm, the firm would not have been permitted to continue to act.

So, while the SRA (per paragraph 9.3 of the SAFO set out above) actively encourages putting things right for clients, it may well be that that encouragement will not extend to a solicitor trying to put things right him- or herself. Similarly, while the SRA did not quibble with the firm’s observation (per paragraph 11 of the SAFO set out above) that the public might think it a good thing that a solicitor might propose a means to put things right’ neither the SRA nor the Tribunal would consider it a good thing if such a proposal required the solicitor to continue to act.

The mandatory terms of O(3.4) must be likely to lead to solicitors who find themselves in situations of own interest conflict being obliged to turn a client away rather than make the conflict go away, even when acting with complete transparency and without prejudicing any rights the client has against the firm and even if it may well cost the client more (funding a new firm reading in and thereafter continuing to act) in the short term.