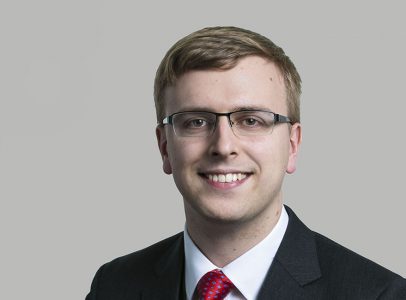 Simon has a broad practice and accepts instructions in commercial, insolvency, and construction cases. He has had experience as a junior in complex disputes, and has a strong commercial and insolvency practice in his own right.

Before coming to Hardwicke, Simon worked for 4 years at PwC, where he assisted FTSE 100, FTSE 250 and private companies on a range of tax and accounting issues. In particular, he advised on employee remuneration and share incentive arrangements, and spent his final year in a team advising banks and other financial services companies on regulatory issues.

From his experience at PwC, Simon understands the needs of clients and the importance of adopting a commercial approach when dealing with the issues they face. His experience as a chartered accountant means he also has a strong ability to quickly grasp business accounts, management and financial information, and understand its impact on the issues in dispute.

Recent and on-going cases include:

Simon’s time at PwC was spent advising on executive remuneration, with a particular interest in share plans. He therefore has experience dealing with the issues and documentation that accompany performance-related incentive schemes, and the contractual and employment law issues that can arise. Recent instructions include assisting in advising as to treatment of a ‘bad leaver’ under the terms of an LLP agreement, and problems concerning the exercise of contractual discretion as part of an individual’s performance-related bonus arrangements.

Simon acts increasingly in cases involving aspects of company or partnership law, and is familiar with the issues that can arise in these areas.

Simon frequently acts for financial institutions in consumer and B2B disputes, dealing with issues under the Consumer Credit Act 1974, contractual provisions and enforcement (including mortgage possession). He also has experience of dealing with banking and financial regulations through his experience in PwC’s specialist Financial Services Reward team. Recent instructions include acting for a hire-purchase finance company at trial in a claim for unpaid instalments.

Simon regularly accepts instructions through Hardwicke’s Fixed Fee Adjudication scheme, and has experience acting for both referring and responding parties.

Simon is part of Hardwicke’s busy and rapidly expanding construction team, and has been involved in both major disputes led by more senior members and matters he has dealt with in his own right.

He has experience of dealing with issues arising under JCT and other standard form contacts (including payment provisions), professional negligence and breach of warranty claims.

Simon has experience of cases dealing with construction, property and property damage matters. Recent instructions include drafting particulars in a neighbour dispute, including issues of trespass, Party Wall Act claims and negligence.

Simon regularly acts in insurance matters, including coverage disputes and professional negligence claims. He has particular experience of health insurance policy issues, and has also appeared in a number of credit hire cases.

Simon has a particular interest in professional negligence, commercial fraud and other disputes involving tax advisors and finance professionals.

He has gained experience of this type of work through assisting others in chambers during pupillage and in practice, and has had published an article in Tax Journal examining limitation issues in professional negligence claims against tax advisors.

Simon has also acted pro-bono for companies needing advice and assistance in winding up petitions via the Company Insolvency (CO.IN) scheme run by City Law School. Issues he has dealt with include the need to apply for a validation order, the impact of a winding up order against the top company in a group, and the steps needed following adjournment of a petition to minimise the chance of the company being wound up at a subsequent hearing.

Simon already has strong experience of bankruptcy proceedings, and frequently represents debtors, petitioners and trustees in all manner of bankruptcy hearings.

Recent instructions include advising on the effect of clauses in a bespoke construction contract designed to operate in the event of contractor insolvency, and in particular whether they offended the anti-deprivation principle.

Member of the Society of Construction Lawyers.