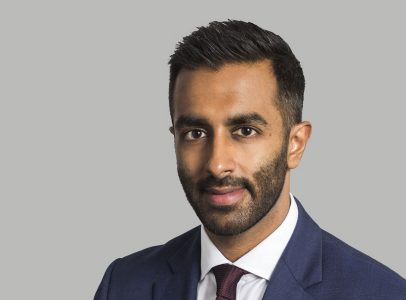 "Rajiv’s advocacy, knowledge of the law and persistence has been outstanding. His ability to think on his feet is also impressive. There is no doubt that he is a rising star."

Rajiv has a wide ranging practice with a particular focus on: employment, commercial litigation, insurance, professional negligence and construction law. He has a particular interest in sports law.

Rajiv’s experience belies his call. He has already been involved in notable cases such as Kumulchew v Starbucks ET Case no 2201217/2014 and Frank Warren v Nathan Cleverly.

Prior to coming to the Bar Rajiv trained as a commercial solicitor at international law firm, Reed Smith LLP. Whilst at Reed Smith, Rajiv was involved in the high profile age discrimination case of John McCririck v Channel 4 and IMG Media (Case no: 2200478/2013). Rajiv also worked on various commercial disputes ranging from intellectual property to shipping, insurance and finance law. His prior experience of being a solicitor makes him perfectly placed to meet client expectations and provide an effective and tailored service.

Rajiv enjoys playing and watching all manner of sports including football, cricket and swimming. He is also currently learning to play the piano.

Rajiv has experience of financial services litigation having worked in the commercial disputes and financial regulation departments at Reed Smith.

Rajiv has a good knowledge of civil fraud and tracing issues having studied Commercial Equity and Restitution during his LLM in Cambridge.

Rajiv has worked on arbitrations with the Grain and Free Trade Association (“GAFTA”) and Swiss Chamber of Commerce.

Rajiv has a particular interest in commercial law and has acted in a variety of disputes from breach of contract, unjust enrichment, breach of fiduciary duty to the tort of conspiracy in relation to the sale of land. He has also obtained injunctive relief in the High Court.

His niche expertise in sports law can be found on the “Sports Law” tab of his profile.

Rajiv’s commercial practice is supported by an LLM in Commercial Law from the University of Cambridge; this has provided him with an in depth knowledge of the legal principles in this area. In addition, whilst at Reed Smith, he was involved in a wide range of commercial disputes such as the construction of charterparty contracts, sale of goods, conflict of laws and banking and financial services litigation.

Rajiv has particular expertise of directors and shareholders disputes

Rajiv’s commercial work has given him experience in dealing with all forms of a corporate vehicle.

Most recently he advised in respect of breach of fiduciary duties of a company director in obtaining unlawful profits.

He has also advised a claimant in respect of claims for unpaid wages and breach of contract against a company that was in Special Administration. The case arose out of a high profile criminal and civil fraud investigation in the UK and Denmark.

He also co-authored a research note on the difference between the defence of “Honest Opinion” in English and Irish law; this was used by a broadcaster to inform a debate in the Oireachtas (the Irish Parliament).

Rajiv has experience of cross-border disputes concerning issues such as choice of law and jurisdiction. He has an in-depth knowledge of these issues having studied International Commercial Litigation during his LLM at the University of Cambridge.

Whilst at Reed Smith Rajiv worked on multi jurisdictional disputes (both litigation and arbitration). He has experience of arbitrations with the Grain and Free Trade Association (“GAFTA”) and Swiss Chamber of Commerce.

Rajiv regularly acts for both employees and employers in complex multiday trials which include discrimination, victimisation, whistleblowing and TUPE. He has a particular interest in disability discrimination claims.

Most notably, Rajiv successfully represented Meseret Kumulchew in her sex and disability discrimination, victimisation and whistleblowing case against Starbucks. The case received considerable press coverage: BBC, The Independent, The Guardian and The Times. The case also featured in the Equal Opportunities Review.

Rajiv has appeared in the Employment Appeal Tribunal and has drafted grounds of appeal and replies to appeals.

Rajiv brings a unique experience to his construction law practice having worked in Reed Smith’s Construction Litigation department and at Pearsons Claims where he dealt with insurance claims concerning property damage.

Rajiv regularly acts for parties in construction adjudications and litigation.

During his time at Reed Smith Rajiv was involved in a high profile billion-pound dispute concerning the collapse of the metro tunnel in Cologne. The case concerned the interplay between construction, insurance and professional liability. Rajiv was also involved in construction adjudications. Rajiv’s experiences at Reed Smith have allowed him to gain a detailed understanding of the work undertaken by construction solicitors and the intricacies of the various forms of construction contracts.

Whilst at Pearsons Claims Rajiv dealt directly with builders and contractors and has a first-hand insight as to the realities of construction projects.

Prior to coming to the Bar, he worked at a firm of loss assessors where he acted for policy holders dealing with household insurance claims. Rajiv’s work included advising on interpretation of policy wordings, working with insurance loss adjustors and drafting appeals to the Financial Ombudsman Service.

He has also acted for the policy holder in respect of a complaint to the Financial Ombudsman Service in a case concerning allegations of misrepresentation by the insurance company.

Rajiv has advised an employee in respect of unpaid wages following a controlled wind down of her then employer.  The case arose out of high profile multi-million pound fraud proceedings.

Rajiv covers a wide variety of professional negligence claims and has particular experience in cases involving solicitors and barristers.

Rajiv has studied equity and trusts at master’s level during his time in Cambridge. He is therefore particularly adept at dealing with thorny legal issues in respect of contentious trusts.

Rajiv has acted for a beneficiary under a will where the will was challenged on grounds of testamentary capacity.  The disputed estate was worth over £3m.

Rajiv also has experience of claims brought under the Inheritance (Provision for Family and Dependants) Act 1975 and in particular complicated claims brought by adult children.  He has advised extensively on quantum and tactics and has achieved favourable settlements for adult beneficiaries

Rajiv has a particular interest in sports litigation. He is currently instructed by the boxing promoter Frank Warren in a contractual dispute against the former WBO Light Heavyweight Champion boxer, Nathan Cleverly.

He is a Sports Resolutions Pro Bono panel member and also a member of LawInSport. He is also one of a few number of lawyers to have been admitted into the LawInSport mentoring scheme.

Prior to coming to the Bar Rajiv assisted in the case of Dwain Chambers v British Olympic Association [2008] All ER (D) 255. The case concerned the British sprinter Dwain Chambers’ application for an interim injunction preventing the British Olympic Association from applying a byelaw which made him ineligible for selection as a member of Team GB for the 2008 Beijing Olympics.

Rajiv has experience of acting for both Claimants and Defendants in defamation actions. Whilst at Reed Smith Rajiv co-authored a research note on the difference between the defence of “Honest Opinion” in English and Irish law; this was used by a broadcaster to inform a debate in the Oireachtas (the Irish Parliament).priv

Rajiv is currently instructed to act for a Claimant in a high profile claim for defamation against a well known news broadcaster in the Middle East. The claim also concerns complicated issues relating to jurisdiction.

He has particular experience in relation to the Middle East.

A Practical Guide to Disability Discrimination in the Workplace” (Law Brief Publishing), publication due in December 2018.