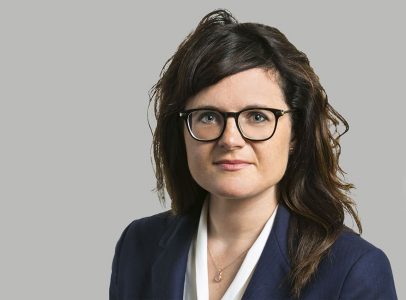 Punches far above her weight in terms of years of experience, and is very bright and tenacious in court. She’s really strong on paper, drafting pleadings and skeleton arguments in an effective way.

A future silk, her attention to detail and work ethic is second to none

She is a great advocate, with a calm and unflappable manner that ensures great results

Emily’s practice encompasses all aspects of commercial and property law. She acts largely in business and commercial property disputes, in particular in areas where her specialisms overlap such as secured lending and commercial fraud. She is an experienced trial advocate, both as sole counsel and as a junior to leading counsel, and has appeared in multi week trials in both the Commercial Court and the Chancery Division.

Emily frequently receives positive feedback for her fast turnaround of high quality work as well as her dedicated and hard-working nature. Her personable manner means that she has a loyal following from a wide range of clients.

Emily covers a variety of banking litigation, especially where there are complex property issues which is the other major element of her practice.

Emily has a particular interest in commercial fraud litigation where her property expertise (see separate tab) gives her a distinct advantage. She is experienced in interim injunctive relief including search orders, preservations of goods, and freezing orders.

Emily also has experience representing parties at interim arbitral hearings to deal with matters of jurisdiction as well as interim applications.

Commercial dispute resolution is a substantial part of Emily’s practice, both in the High Court and Arbitration. She is regularly instructed on contractual disputes including those involving specialist aspects such as utilities, commercial agency and surety claims. She is experienced in obtaining and resisting applications for interim injunctive relief, including search orders, preservation of goods, freezing orders and springboard injunctions.

Emily has a particular interest in JVs and partnership cases where her property expertise (see separate tab) gives her a distinct advantage.

Emily frequently advises on issues of private international law in the context of both commercial litigation and arbitration.

Emily is experienced in the full range of commercial landlord and tenant work including 1954 Act tenancies, dilapidations, vacant possession, forfeiture and relief from forfeiture.

She has a particular specialism following her appearance at first instance and in the Court of Appeal in an important decision concerning tenancies at will, where a commercial tenant held over after the expiry of a fixed term lease: Barclays v Erimus [2014] L&TR 1 (Ch D); [2014] L&TR 23 (CA). She regularly advises in relation to contested renewals under the ’54 Act and break notices.

Emily also advises in relation to agricultural tenancies and is happy to receive further instructions in this regard.

Emily regularly represents and advises clients in relation to property development issues such as restrictive covenants and easements, adverse possession, trespass and party wall act disputes. Emily has a particular interest in utilities and telecoms issues in a development context.

Emily also has experience of residential landlord and tenant work. She is regularly instructed on behalf of private landlords, mortgage companies and local authorities, as well as on behalf of tenants. She has considerable experience with short tenancies as well as leasehold disputes, such as service charges, lease extensions and disrepair claims. More recently she has been instructed in a number of cases where the possession proceedings are expected to generate some public interest.

Emily has also been instructed to act in a number of mediations relating to landlord and tenant disputes.

Emily has experience in all types of real property cases including advising on development issues such as restrictive covenants and easements, adverse possession, trespass, TLATA claims (see separate section), party wall act disputes, boundary disputes, fixtures and ownership issues. Her clients include landowners as well as energy companies and other parties exercising rights over land.

Emily has a particular specialism in mortgage actions. She frequently advises and represents lenders in complex cases of mortgage fraud. In addition she has experience with cases where there are difficulties enforcing a lender’s rights and redemption actions.

Emily also advises on property insurance issues, and contributes towards the ‘Property Insurance’ Chapter in Paul Reed QC’s book on Construction All Risks Insurance. She has experience in both coverage issues, as well as advising on related property damage claims.

Emily’s expertise in property litigation has made her a popular choice for professional negligence matters against property legal professionals.

She has particular experience in property-related claims including cases involving covenants, rights of way and declarations of trust. Emily regularly drafts and responds to Protocol Letters of Claim, as well as advising on instructions to experts and Part 36 offers.

Emily has also advised and assisted with professional negligence matters referred to the Legal Ombudsman.

Emily has considerable experience of TOLATA claims as part of her real estate litigation practice. She frequently acts in co-ownership disputes concerning the creation of beneficial interests and the enforcement of an order for sale. Many of these claims involve complex issues of equitable accounting between co-owners.