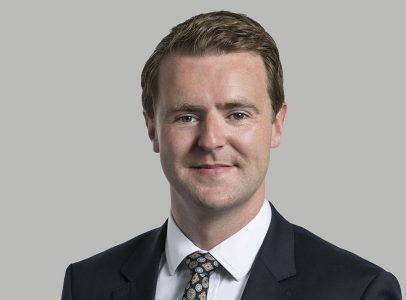 Aneurin specialises in clinical negligence and personal injury claims. His clinical negligence practice covers a wide range of medical disciplines. He is regularly instructed in claims arising out of delays in diagnosing cancer, delays in diagnosing neurological conditions (such as stroke and subarachnoid haemorrhage), surgical errors, and hospital acquired infections.

He also has related expertise in inquests and medical product liability.

When called to the Bar in 2013, Aneurin had already built up considerable experience at two solicitors’ firms. As well as practical experience, this has given him a good understanding of the pressures under which solicitors operate and the need to be clear and mindful of costs.

Outside of the law, he has a keen interest in watching and playing cricket and has followed the England team to Sri Lanka, Australia and South Africa. He also supports Bristol Rovers, although this is more of a duty rather than a hobby!

He also finds the time to sit on the Lexis PSL Consulting Editorial Board for Personal Injury as well as run a clinical negligence blog.

Aneurin’s practice is largely focussed on clinical negligence claims, and he is a specialist in this area.  His practice is predominantly claimant based, although he is also instructed on behalf of NHS Trusts and individual doctors.

He is regularly instructed in claims arising out of delays in diagnosing cancer, delays in diagnosing neurological conditions (such as stroke and subarachnoid haemorrhage), surgical errors, hospital acquired infections, and the development of compartment syndrome.  He has successfully settled several cases concerning alleged failures to provide fully informed consent.

His experience also includes birth injuries, wrongful birth claims, falls in hospital, and errors in anaesthesia.  Aneurin was also instructed in a claim arising out of the Stepping Hill Hospital poisoning scandal.

Aneurin frequently appears at coroners’ inquests, where he usually represents the family.

Aneurin is regularly instructed in inquests, usually arising out of deaths following suspected negligent medical treatment. He is frequently instructed in Article 2 inquests, and also has experience with juries.

He often represents families at inquests, but also acts for doctors and healthcare trusts. Aneurin will consider acting on behalf of families on a CFA basis where there are prospects of a subsequent claim.

Aneurin handles a wide variety of personal injury claims from fast track work to the higher courts. He has particular experience in stress at work cases, but is also instructed in road traffic accidents, occupiers’ liability claims, and EL/PL claims. His clinical negligence experience makes Aneurin well placed to deal with complex causation and quantum issues.

Aneurin is instructed in product liability claims, and has particular experience in claims arising from defective medical products.

He is currently instructed as junior counsel (led by Jacqueline Perry QC) in a series of cases arising out of the use of polypropylene mesh in medical devices.

Aneurin regularly handles disputes involving insurers, details of which can be found in the Clinical Negligence, Personal Injury and Product Liability sections of his profile.